Watch out, Silicon Valley. We’re coming for you!

In 2015, Deborah gave a widely-acclaimed TED talk about the importance of introducing computer science and technology education as mandatory subjects in primary school. At the time, a documentary film producer interviewed her and asked if education reform in the Netherlands should be an evolution or revolution. In true Deborah form, she answered ‘revolution’. She stands by her answer.

Almost three years later, most primary schools in the Netherlands and across Europe are not teaching computer science, computational thinking or technological literacy. This is a major problem as these subjects prepare students for rapid and constant technological development and to become conscious and empowered citizens.

Durin her talk, Deborah will renew her call for computer science to become a mandatory subject in primary school. She’ll talk about how NewTechKids, the company she co-founded, is addressing major barriers such as teacher training, curriculum and lesson resources, pedagogy and teaching approaches. She’ll also talk about ‘Rising Technologists’, girls, minorities and children from low-income families who are under-represented in technology-related studies and professions. Given access and equal opportunity, she believes that these children have the potential to become future technologists and leaders who contribute to society. 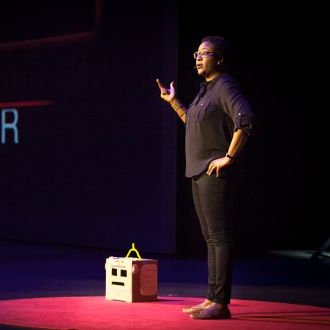